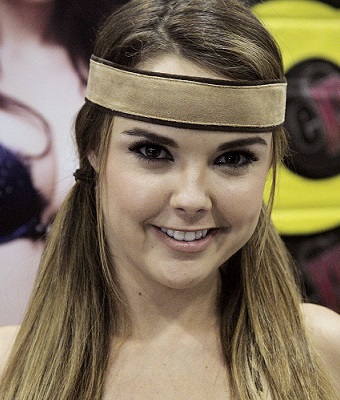 Dillion grew up in Florida but moved around a lot as a kid. An only child with her Dad until she was 8, Dillion never really had a maternal figure in her life. Her Pops met a woman who would eventually become her step-mother, and Harper credits this lady as the one who taught her how to be a young woman. Well, that young woman ended up getting split wide open at 15 and flood gates had officially been breached!

A Pussy with a Cock’s Mind

Dillion and her Dad don’t speak any longer. He couldn’t bare hearing about her long work days, cleaning cum off the set and picking pubes from her teeth. But her stepmom is still in the picture, supportive according to Harper and encouraging her to live her life to its fullest. Dillion likes to be naked and touched. She is quite upfront about that and her boyfriend has had to deal with her roaming eye every now and again. Here’s another classic quote – “In relationships, I am really bad at keeping track of anniversaries and such. I think I’m the opposite of most girls.” Translation … she has the mind of a dude and likes to get her clit lit and could give a shit who accommodates her nor where.

Harper fooled around with webcams while in high school. She would entertain dudes online while her parents watched the nightly news in the next room. Unbeknownst to them Harper was a budding entrepreneur, using her perky tits and shaved kittie to bring in the dough and put her on a path to full-fledged cunt-jamming on camera. The ever-supportive boyfriend at the time, he suggested to Dillion that she bounce down to Miami to film some scenes with Bang Bros. According to Harper she had never even seen a porn film before shooting her first scene with some impressive cocks and balls.

A Combo Pack for Your Dick

One of the more hotter selling items, the Dillion Harper Crush Combo Fleshlight is not only a fuckable sleeve, but also comes equipped with the Fresh & Clean care pack, an 8 ounce Fleshlube water, care and usage instructions (so you don’t fracture your cock on the first go around) and a Fleshlube sample. Just the type of kit you would receive say on the first day of a new job or as a take-away bag after your employer’s annual conference. But this time around you get to plug your hot next-door neighbor. It doesn’t get any better than that!