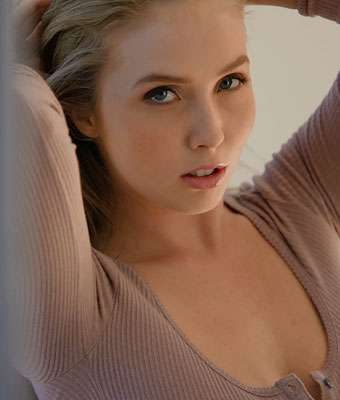 Lena Paul was born on October 12, 1993 in Florida. After growing up she was enrolled in two universities. After graduating she worked for two startups concerned with sustainable agriculture. Because of financial straits the company was not able to pay all its employees, which made Lena search for other income opportunities. As many girls before her, she started her adult entertainment career as a web-cam girl. This did not go unnoticed by the industries talent scouts, who quickly gave her a call. Having the opportunity to earn more money while also having more fun, she opted for a career in the adult industry.

Shortly after her 25th birthday in October 2018 she became a part of the Fleshlight Girls family. Along with her pretty face, two new Fleshlight textures arrived in the store. Both textures are exclusive to Lena Paul’s orifices. One for her pussy and one for her butt.

Nymph is Lena’s astonishing pussy texture. It offers unique and highly pleasurable bumps paired with an open canal and symmetrical structures. An impressive combination of stimulation and realism wait in this texture.

In 2017 Lena Paul was first nominated for an award. In her short career until now she managed to win:

Further awards she was nominated for include:

Despite only being in the business for a short time Lena Paul has already managed to be credited with over 200 scenes, among which are: