Adriana Chechik is the new addition to the Fleshlight girls of June 2017. Together with her, two new Fleshlight textures arrived. Empress is the first one and Adriana’s exclusive Lady Fleshlight. As a result it is only available in combination with Adriana’s pussy as the orifice. It also features her signature just next to it.

Because all the orifices of the Fleshlight Girls are modeled true to the original, Adriana’s pussy mold is also unique. This orifice remarkably showcases her slim labia.

This distinction is not meant as a verdict about the experience of Empress, because the texture is highly stimulating. Instead, it should highlight the different approach for the textures of Adriana Chechik. The Empress is in fact covered with fine cross ribs, which are varying in direction and create a dense grid of strongly stimulating structures.

The structures in Empress start after about 0.8 inches (2 cm) behind the orifice. From there on until the very end, they consist of the same element: a slim but long-stretched rib. Many of those are bundled tightly together and one bundle follows the next one with only small gaps in between. Because they are also slightly twisted, they create small chambers at their transitions. Within these is more open space remaining than between the ribs.

The main components of Adriana Chechik’s Empress texture are the slim ribs. They have a length of about 1.2 inches (3 cm) and a width of 0.2 inches (0,5 cm) each. Their height is more or less the same as the width. Because they have rounded tops, their base is wider than the narrow ridge at the top. As a result the stimulation is more detailed due to the finer edges. At the same time the intensity decreases a bit because of this circumstance. The reason is that the ribs can more easily be bended, when the penis rubs along them. Therefore they provide less resistance than a rectangular block would do.

Because the ribs occur in an extremely high frequency, the sensation they produce is not low at all. In fact it is quite the opposite and this high stimulation remains throughout the whole texture. After all, there are no unstructured transitions in the canal. Instead, each rib is immediately followed by the next one.

Five of these ribs form small groups. They all begin at the same depth and have equidistant gaps between them. Because they are slightly twisted, they create a soft vortex. Two consecutive groups or rings of these ribs always turn into the same direction. The first two of the Empress texture start by turning in counter-clockwise direction.

This alternation of direction produces an extremely pleasant stimulation. At the same time it prevents the feeling of getting a knot in your penis. In contrast to other textures with similar vortices, the distinction of Empress is that the change of direction only happens after every second ring.

One important detail has been left out until now: the diameter. It measures on average about 0.8 inches (2 cm). Admittedly, there are parts at the begin and the end with about 1 inch (2,5 cm), but they are rather short in comparison to the rest. The parts, in which the structures really operate, leave between 0.8 inches (2 cm) and 0.4 (1 cm) inches remaining for the penis, depending on whether you measure between the ribs or the interspaces. So, in general the diameter is narrow but not exactly tight.

There is also a good reason for this. Because in this way the distinct ribs can way better show off their pleasant stimulation, while the texture remains intensive and highly pleasant. If the diameter is too tight, the single ribs will not be discernible anymore, because the pressure, and the accompanying intensity, will get too high. In the way it is the intensity remains on a pleasant level, which the texture greatly benefits from.

Low variety and much lube

Even though the texture is highly structured, it can unfortunately not provide much variety. It is limited to the various rib rings and their changes of direction. Yet, this should not be mistaken for boredom. On the contrary, the texture is very exciting and the continuous ribs provide a constant stimulation. In this respect, it is even more impressive how much can be brought out of only one kind of structure.

This continuity provides an additional advantage for men with a shorter package. Because of the repeating structures in Adriana’s Empress, it does not make a difference how long the penis is. Even when you only have a few inches, you will experience the same structures and sensation as if you reach until the very end. Therefore you will not miss out on any other structures, you haven’t experienced already.

The many ribs also require more lube than on average, in order to keep the texture lubricated. While smooth surfaces do not require as much, within Empress all the surfaces of the ribs have to be covered. Therefore the lube requirement is rather high.

This lube has to be removed, together with other bodily residues, from the texture after each use though. This cleaning process unfortunately is more tedious with the detailed Empress texture. The inclined cross-ribs hold the substances back in their interspaces. Therefore you really have to thoroughly swipe through all the ribs, in order to get everything out. Especially around the center, where you cannot just easily rinse everything, you should pay more attention to the ribs.

Subsequently to the cleaning is the drying. Adriana Chechik’s Empress, unsurprisingly, also requires more time to completely dry again, which is not exactly astonishing, considering the high amount of ribs that are used in there.

Adriana Chechik got awarded with an intensive lady texture listening to the majestic name Empress. From the start on it satisfies with intensive stimulation and keeps this strong sensation until the last inch. The small flaw of these continuous textures is always the lack of variety, which in the case of Empress means only one single kind of rib. This is no reducing sign of quality though, because stimulation and intensity are great. If you do not mind the consistency and a bit more effort to clean it, you will find an amazing sensation in the Empress Fleshlight. 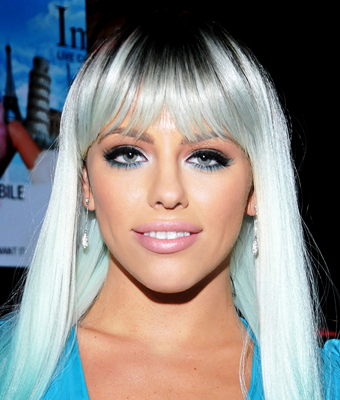