Lush is a typical Fleshlight Girls texture. They are characterized by a wider diameter and a large number of different and playful structures. As it is common for exclusive textures, Lush also has some unique constructions to offer. Its playful but intense nature makes it rank as one of the best textures among the many Fleshlight reviews.

Abigail Mac’s signature sleeve sticks out with many, rapidly succeeding structures consisting of larger elements. While doing so the texture manages to omit using classical constrictions as its transitions. Hereafter we will give you an insight into this sensual texture.

Many short sections with varying structures

Lush does not have chambers in the classical sense, because it does not use a lot of typical constrictions to divide the canal. These usual ring-shaped constrictions have not made their way into Abigail Mac’s Fleshlight. Instead, you can split the inside of the canal roughly into six different sections.

They each consist of short combinations of a single element, whereas this element is different in each chamber. For it nubs and ribs are used, but always designed and arranged in new ways. Due to this Lush manages to create an exceptional variety. In different spots the texture even presents completely novel structures, giving Abigail’s Fleshlight a very personal touch.

Part one: into Abigail Mac

Through Abigail Mac’s slender pussy the opening leads into the Lush Fleshlight. In here three narrow cross ribs already await the penis in the yet 0.8 inches (2 cm) wide canal. After only 0.6 inches (1.5 cm) of these soft ribs, the canal widens to 1 inch (2.5 cm). This measure will from now on remain the diameter for most of the time. Merely along the actual stimulating elements it will naturally decrease.

Another structure that can be attributed to this section is the following bump ring. It features eight mid-sized round nubs, with small nipples on top of them. They pleasantly stroke over the penis, preparing it for the first intensive stimulation.

The second area consists of large and pointy cross ribs. The stick out for about 0.2 inches (0.5 cm) at their middle and slope towards its ends. This gives them an appearance like small mountains that stick out sideways from the canal walls. Additionally these ribs are not full-width, therefore they do not form rings. The result is a pleasant change between smaller and larger pointy edges, each providing a strong resistance compared to the previously encountered nubs.

The section is also one of the specialties of Abigail’s Lush. Even though it appears already quite early in the texture and has a length of only 1.2 inches (3 cm). But it manages to create this wonderfully soothing stimulation. The final edge leads the canal directly to the next area.

A large vortex in the middle

Admittedly the next structure is not a novelty, but always a pleasure. It is a counter-clockwise rotating vortex. The shape comes from long, twisted cross ribs with a width of 0.4 inches (1 cm) and a height of 0.2 inches (0.5 cm). Between the windings is only a small gap. This spiral wraps around the penis, while also providing a pleasantly strong resistance.

After three whole turns the spiral comes to an end. With a total length of about 2 inches (5 cm) it is also the largest structure of Lush. Because the ribs themselves are relatively high, the canal diameter reduces down to only 0.4 inches (1 cm). As a result the vortex provides an outstanding stimulation and a fantastic penetration sensation.

Due to its placement in the middle of the texture, this spot will regularly be passed no matter the penis length. So it is not only in reach for almost all men but will also be rubbed along with every stroke. Leaving this vortex, it is time for a more gentle stimulation.

Many, many small nubs

The upcoming 1 inch (2.5 cm) long section is filled with round bumps. They are arranged in three rings in crosswise direction. Between each two of the rings only a small gap remains left. The bumps of the rings themselves, though, are placed closely so that no interspace remains.

The nubs have a diameter of 0.2 inches (0.5 cm) and a height of 0.1 inch (0.3 cm). Therefore they only reduce the diameter minimally. Due to the wider canal and the amount of bumps this section creates a gentle stimulation, making it feel like one large continuous surface.

The last but one section is again longer with 2 inches (5 cm). In it is another highlight of Abigail’s Lush texture. This construct consists of wide longitudinal ribs and reminds us of the central structures in the Crush Fleshlight. At the same time this area is the first typical constriction of the whole texture.

As mentioned, the structure consists of almost 0.4 inches (1 cm) wide longitudinal ribs with a length of 1.2 inches (3 cm) each. On top of that they are shaped like waves, whereas the first wave is also the highest. In total there are three of these up and down motion, while the waves additionally decrease in size. The first top reaches a height of about 0.27 inches (0.7 cm), reducing the available canal diameter significantly. Between each of the wave-shaped ribs remain small gaps. But these are not structureless. Instead they house more of the waves but much smaller in size.

Due to the way the structure is built, the penis first hits the tighter beginning and from then starts to glide along the single waves, while the canal slowly widens. This change from tight to wide structures improves the sensed penetration in a nice way.

After the final wave the corridor remains without structures for a bit. Then the final section finalizes the Lush texture.

Tentacle look at the end

The final part before the texture comes to an end is only a small section. In here is a smaller constriction with slanting sides. On these sides are then again flat, larger bumps. They only stick out of the canal for a tiny bit and have relatively spacious gaps between them.

They provide this whole area with a tentacle look, because the flat round nubs have the appearance of sucker cups. Due to their small height and the only minor narrowing of the canal this structure only provides a negligible effect.

On top of that it is immediately before the end of the Fleshlight, therefore a lot of men will probably not even reach this far. Still it looks good.

Abigail Mac’s Lush Fleshlight is a typical example for the Fleshlight Girls. It provides so much variety from the beginning until the very end and also has some new combinations to offer. In contrast to other textures it does not house classical tight spots and artificial constrictions. Instead the various structures have to take over this part.

Besides the many kinds of bumps and ribs themselves, there are also new combinations of these structures. The rather wide diameter makes sure that these elements can perceived without numbing the penis by being too tight.

The disadvantage when looking at this many structures is always that the space inside the texture is limited, and some of them eventually have to end up really late in the back of the sleeve. This is especially problematic for men with a shorter penis, because they have to miss out on these late structures. Even though the best structures are placed towards the beginning and the middle part, it is a pity that they might have to pass on the wavy part.

The multitude of grooves makes the cleaning of the Lush texture more tedious, especially around the spiral in the center. Be aware that you should clean this part very thoroughly with your finger, and to not miss any of the grooves so no residues will be left behind. In general the back part of the texture is easier to clean.

The drying time behaves similar. While the later sections provide larger spaces, the grooves around the center and the beginning take a bit longer to dry. All together the effort to clean is not much higher compared to other Girls textures, though.

Abigail Mac was awarded with a great exclusive Fleshlight texture. It offers a wide variety of structures and stimulates in a fantastic way. It does so by changing the intensity between soft and strong depending on which structure you are currently at. There are hardly constrictions in the texture though. Lush therefore can be recommended to men who are looking for a soothing pleasure due to its pleasant stimulation. 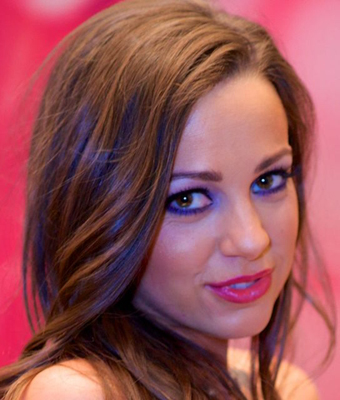 Want to know more about me?
Check offers